I've never tried a Lancôme mascara before despite the fact that I've often bought them as gifts for other people. I know that they have great reputation for being excellent high end mascaras so when this Hypnôse Volume-à-porter mascara arrived in the post I was incredibly excited to give it a try.

The concept behind the campaign for this mascara is that the eyes say just as much as the lips and in French culture there is an emphasis on the power of the gaze.  Let's put it this way, you know a mascara is amazing when you're talking to your friend and they tell you they didn't hear a word you said because they were too busy staring at your eyelashes. 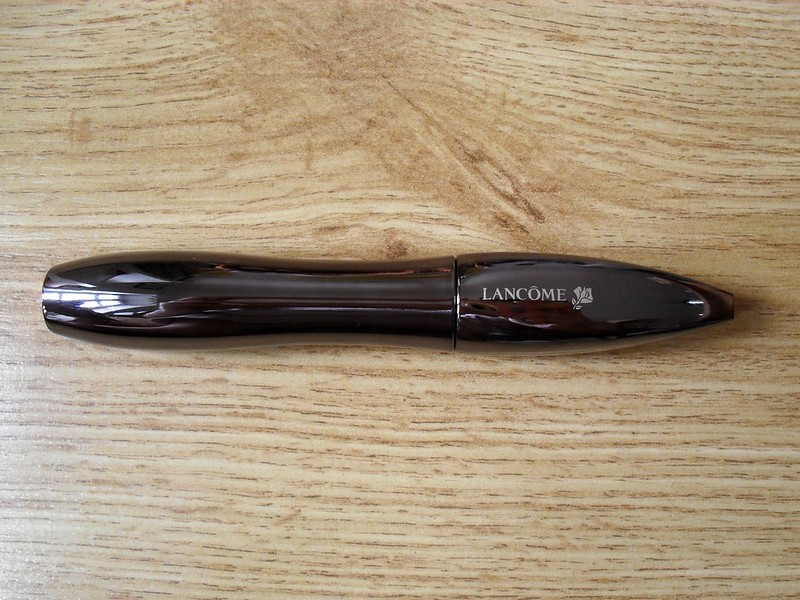 For years I would have chosen length and definition over volume every time, but getting up early for work every morning means that I forgo wearing eyeshadow most days and therefore the only eye make up I wear is mascara. Recently I've been wearing more volumising mascaras to compensate for having naked eyes and paired with shaped brows, some blush and a bold lip, it's been my go to effortless make up look most days.

Straight away I was impressed by the sleek, minimalist gunmetal packaging. For me Lancôme have always been such a classy brand and I've long admired their general aesthetic and packaging. 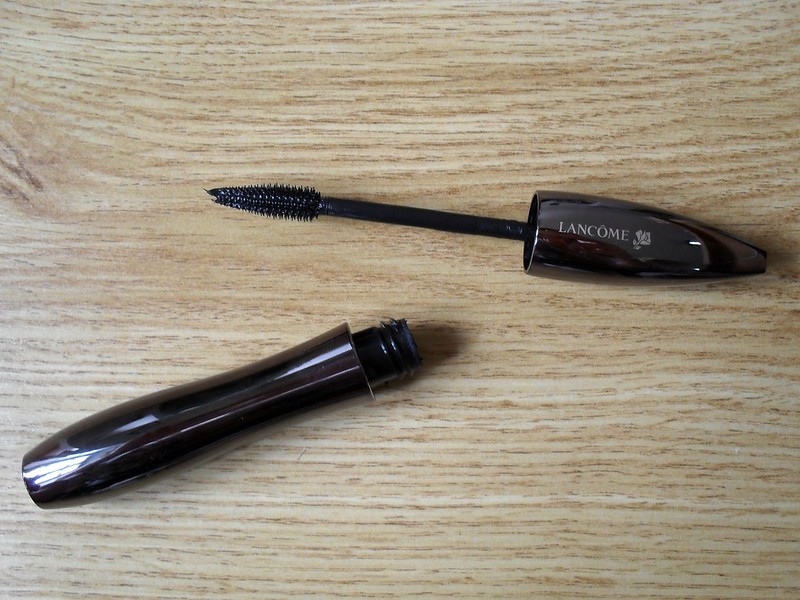 It's the first time Lancôme have used an elastomer brush which means that it's flexible but still manages to maintain a great shape. I usually don't go for rubber brushes, but this one is like no other I've tried. The wand is tapered which allows you to coat the tiniest inner lashes with ease. There are 306(!) yes, that's right, 306 bristles on the brush. The shorter bristles coat the roots and the longer ones bring the mascara through to the tips of the lashes giving full and even distribution.

When I first applied this I wasn't hugely impressed with the volume it gave, however after the application of a second coat I could see exactly where it gets it's name from. It's the first mascara I've used that allows for a second coat with such ease and not a clump in sight. You can see below that there is length, volume and definition which is very hard to achieve with your average mascara. 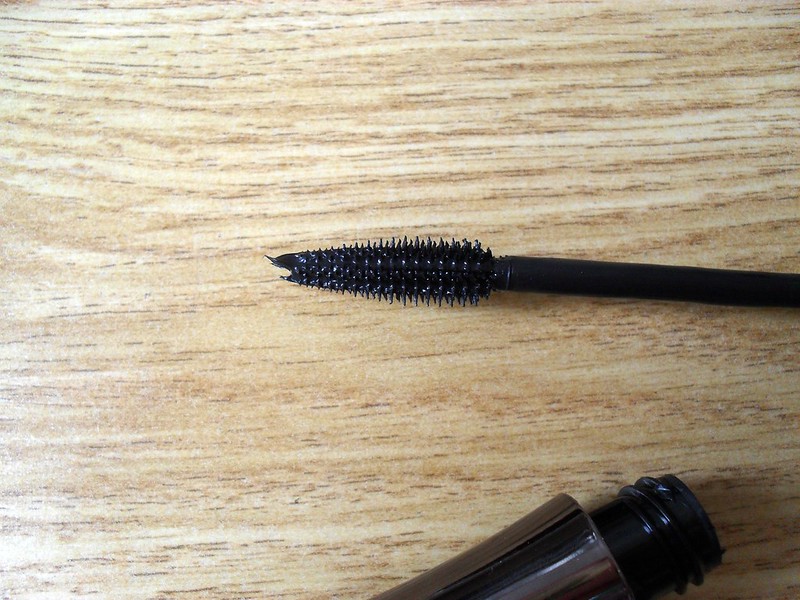 It's not just the brush that's amazing, the formula consists of a melt-in cream texture and it's smudge proof so there is no transfer under my eyes during the day. The formula also contains latex which gives great hold. I curl my lashes beforehand and I've noticed that this holds the curl all day because it's so lightweight.

Not only do you get the most beautiful instant results from this mascara, you also get the continuous benefit of the exclusive Lancôme Native Rose Cells extract that leaves the lashes softer, stronger and more full looking after just a few weeks. 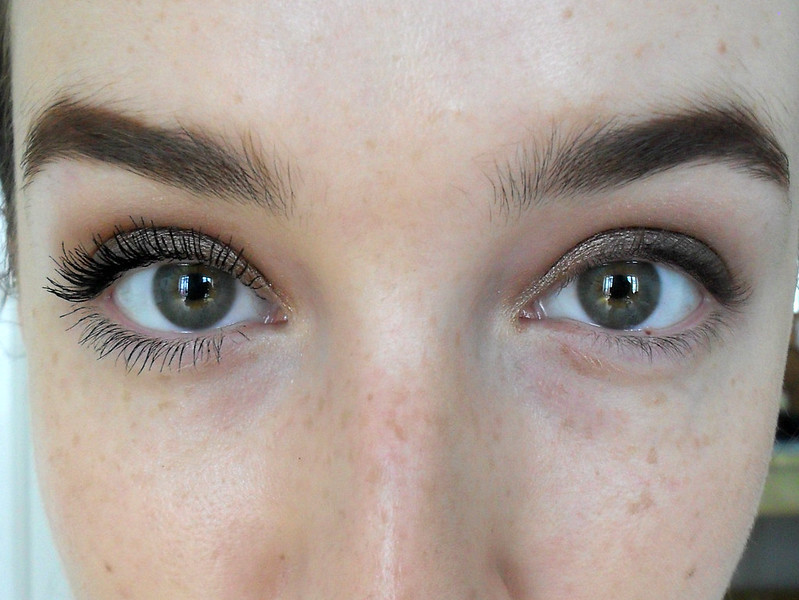 I don't have a bad word to say about this mascara, it even has a scent of roses. At €27.50 it is very pricey for a mascara and a lot more than I would usually pay, but if you like to wear minimal eye make up or if your lashes are in need of some TLC, this is the mascara for you. I've been wearing this for a couple of months now and it hasn't dried out at all which is very rare in my experience so you definitely get value for your money.

YSL have released chromatic replicas of four iconic shades from their Rouge Pur Couture lipstick range in the form of the Vernis à Lèvres Glossy Stains and La Laque Couture matte nail lacquers. The four shades are Le Rouge, Le Orange, Le Fuchsia and Le Nu. The Vernis à Lèvres are a high shine formula with intense colour and luminosity while spherical silica has been added to the La Laque Couture to give a modern matte finish to the nail colours. The idea is to mix and match the contrasting shades and finishes on your lips and tips.

I was sent Le Nu, a refined and minimalist soft beige, which isn't a shade I would normally choose. I usually avoid nudes as they tend to be too pale and unflattering. However as soon as I applied Le Nu I was taken back by how much I loved the colour. It's the most chic nail shade and the matte finish gives it just the right amount of edge for such a toned down colour. 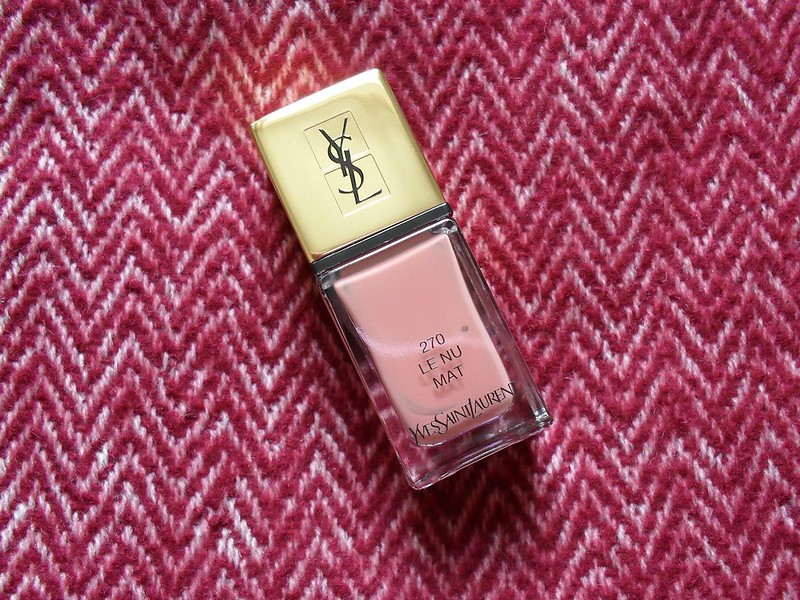 For me, this is to the nails what Charlotte Tilbury Bitch Perfect is to the lips. Flattering, understated and goes with everything. It's the perfect combination of brown and pink that I feel would look great on any skin tone.

The other thing that sold me both this straight away was the application. It has a wide brush that makes applying it so quick and easy. The formula is perfect too. Sometimes brands get it right with the brush but the formula is too thin and you end up having to apply three coats or it's to thick and difficult to apply evenly. You could get away with one coat of this and achieve full opacity. 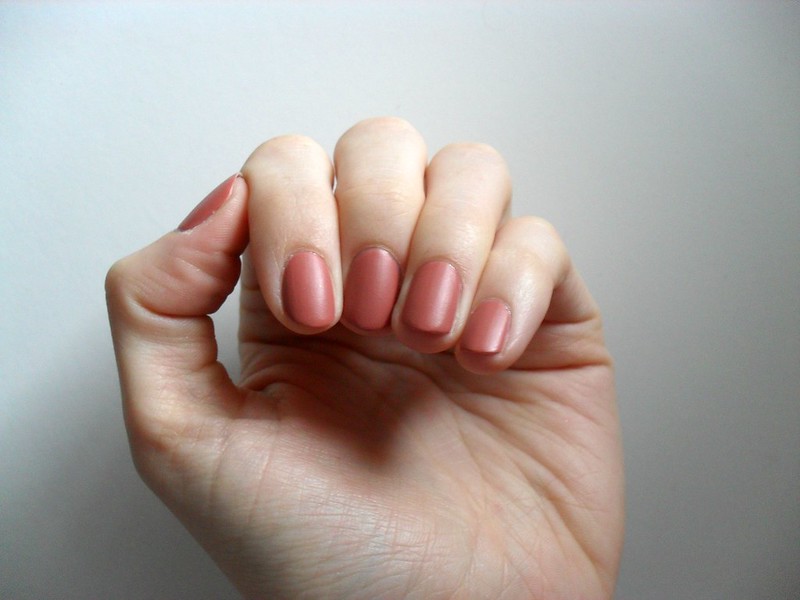 The wear time is another bonus, I had minimal wear on the tops of my nails after four days and that was with a very hectic week in work where I was using my hands all day every day. The matte finish also starts to wear away after a few days and there is more of a shine to the nails but I don't have a problem with that at all, you could even add a top coat to achieve a shiny finish if you wished. The packaging is also second to none. The gorgeous little gold lid lifts off and there is a second smaller round one underneath so don't worry you won't have to hold that square lid to apply the polish.

Having never tried a YSL nail lacquers before, I am now a full convert and I'm already thinking about which shade I want to try next. The La Laque Couture range retails for €24 which I have never spent on a nail polish in my life, but I genuinely would pay it for another one of these I was that impressed. The collection is available at Brown Thomas from October 1st. Will you be checking these out in person?

What are you wearing on your nails this Autumn?

I'm just back from the most relaxing holiday in Nice and it seems the Irish Summer is truly over (what little Summer we had). As sad as I am that the hot weather of the French Riviera will soon be a distant memory, I'm very excited for my favourite time of year- Autumn.

I've already been doing some shopping for Autumnal clothing and accessories to add to my cold weather wardrobe. I had a look in Zara when I was in Nice and saw so many things I loved so I decided to share some of my favourite pieces from their new collection with you today.

As much as I love the 70s trend on other people, most of the clothes just don't do anything for my curvy figure, however I do love a good blouse with my jeans and this Loose Fit Blouse screams late 70s Stevie Nicks to me. The V-neckline is something I try to go for with looser fit clothing because it just makes it that much more flattering on me. I could see myself wearing this with black jeans and this amazing Leather Jacket, heeled boots like these Combined Ankle Boots and a wide brimmed hat. I love these Sparkle Ankle Boots that my boyfriend has nicknamed the David Bowie boots. I think they would be a great alternative to heels for the Christmas party season as they're dressy yet more comfortable for walking around in the cold weather. Another way of bringing the 70s trend into my Autumn/Winter wardrobe is with a statement coat like this Jacket with oversized sheepskin lapels. I adore the colour of this and at only €59.95 for a wool mix it's an inexpensive way to keep warm and look stylish this Autumn.

One of the things I love about Autumn/Winter clothing is playing with textures. I love this fluffy metallic and navy Leopard Print Sweater and this burgundy Mock Croc Messenger Bag for adding dimension to an outfit. Another way I like to incorporate trends into my wardrobe is with my accessories and as much as I love the fringing and tassel trend I think I prefer it on shoes/bags/jewellery as opposed to clothing. This stunning pale green Leather Messenger Bag with Tassels is a great way to bring colour into your Autumn wardrobe, I absolutely adored the pastel trend last Winter, I think paler shades look really chic in the colder months.

Zara has become one of my favourite high street shops for jewellery in recent years. In terms of statement jewellery, they have some incredibly cool pieces like these Long Geometric Earrings that could be an amazing alternative to the usual sparkly Christmas bling. This black Chain Necklace is in the same vain as the earrings, a statement piece of jewellery without looking like a Christmas Tree. It looks incredible in person.

Lastly is my favourite Autumnal accessory, the blanket scarf. As soon as the weather gets chilly I have to have my neck covered and I'm always on the look out for a gorgeous cosy scarf to keep me warm. When I was in Nice I saw this Zig Zag Scarf and fell in love but I knew I wouldn't be able to fit it in my already full suitcase so as soon as I got home I went into Zara to buy it. While I was there I also saw this Animal Print Scarf and it's now at the top of my list to buy on payday. It looks amazing on and it's so soft and cosy. I love a printed scarf for adding some style to a plain coat in the Winter. I'm now excited for the weather to get colder so that I can wear my new scarf (I must be completely crazy).